Thanks to its advantageous location, ‘Perlas del Mar’ allows you to enjoy everything best that Southern Spain can offer, including the legendary port Banús which is just 6 min away.

Fabulous, hedonistic and celebrity-friendly Puerto Banús is one of the places to be on the planet of enjoyment and fun. For the last decade, the largest tourist magnet has been recording a whopping 5 million tourists every year. What’s not to like? Boasting scenic vistas, trendy vibe and jet-set appeal, it offers exhilarating adventures, top-class international fine dining, off-the-charts shopping, Blue-flagged beach and some of Europe’s best beach and night clubs.

50 years ago, young Julio Iglesias was hired to sing at the lavish opening of the new port. Later the neighbouring street would be called Avenida Julio Iglesias.

José Banús, a developer from Madrid and a close friend of general Francisco Franco, fell in love with the area after buying some land (now Nueva Andalucía), to breed toro bravo for bullfighting. Impressed with a beautiful setting, majestic mountain backdrop and unrivalled panoramic views of the Mediterranean, Gibraltar and Africa, he invested a fortune in the port project … and never had a chance to regret! The most expensive property of the area was sold, as they say, in a New York minute. 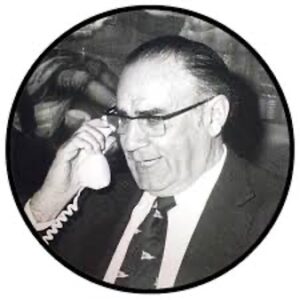 In 1970, Jose Banús organised an amazing inauguration party to introduce the world to his baby, and it was an indication of the scale on which he usually operated. The grand event celebrated in lavish style cost him 8 million pesetas. 300 best waiters from Seville served 22 kilos of beluga caviar to 1700 guests. Julio Iglesias was contracted to sing for the enormous at that time sum of 125,000 pesetas (750 euro). Among the honourable guests were Prince and Princess of Asturias Juan Carlos and Sofía (future Spanish king and queen), Prince Rainier of Monaco, Princess Grace of Monaco who danced pasadoble, the pioneer of the heart transplant Doctor Christian Barnard, famous businessman Aga Khan, Hollywood film director Roman Polanski, ‘Playboy’ founder Hugh Hefner, Brigitte Bardot, Liza Minnelli and many other celebrities and global elite.  And that was just a beginning… 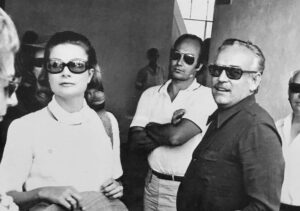 The famous Swiss-Russian-Mexican architect Noldi Schreck who took part in Acapulco and Beverly Hills development and together with his assistant Marcos Sainz, another young architect from Mexico, worked at the image of Marbella Club Hotel in 1966, influenced Puerto Banús’ style. Schreck convinced the developer, Don José, not to build huge skyscrapers for thousands of wealthy families. Instead, he proposed a classic Andalusian-style village concept and an elegant marina for yachts. After completing the work, Shrek returned to Mexico but is remembered with a star on Puerto Banús Boulevard of Fame. Marcos Sainz never left Marbella.

Today, more than 70 national and international firms that have a presence in Puerto Banús have to follow guidelines loyal to the original styling of the port, with white façades, terracotta rooftiles and balconies with black railings. Bright or fluorescent colours are completely forbidden.

Only the top architects have been investing their talent into the beautiful buildings of the area. Some of them, like the Gastrobar & Garden ‘Breathe’ on the edge of Puerto Banús or the residential complexes Laguna de Banús and Oasis de Banús carry the distinct mark and spirit of the highly-regarded studio ‘González & Jacobson Arquitectura’, which has also designed ‘Perlas del Mar’. 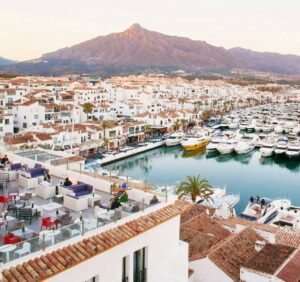 Puerto Banús (and Marbella in general) is a microcosm of the global community, as diverse as it can be. See for yourself.

The port that bears the name of a Madrileño born in Tarragona, was created in Andalusian style by the Mexican architects, one of them had a ‘Siberian-Swiss’ origin. Both were invited to work in Marbella by Prince Alfonso Hohenlohe of Spanish-Mexican-German-Czech descent, whose first wife was Italian-Hungarian-American and the second was British-Russian born in Austria. How symbolic!

Here, on any given day you can hear Spanish, English, Russian, Arabic, French, Dutch, Swedish, Chinese, Hindi and many other languages. 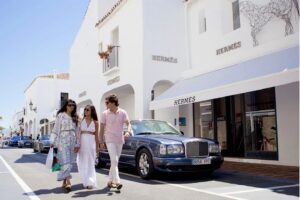 With high-end reputation and complete absence of all-inclusive wristbands, Marbella needs no introduction. Since the European aristocracy put the resort on the map back in the 1960s, its appeal as a luxury destination and celebrity hotspot made it a playground for the rich and famous. Breath-taking cars parked next to the super-yachts of the world’s wealthiest people, exclusive clubs and designer brands boutiques – this is the image of Puerto Banús. Of course, it had its challenges, ups and downs, but glamour has always been very much the name of the game.

If sports cars are more your thing, there are plenty of Ferraris, Maserati, Porsche and Lamborghini to admire, as well as vintage Jaguar and Rolls-Royce, or exclusive Aston Martin and Bentley.  If you enjoy people-watching you’ll never be short of celebrities to spot. And of course, the yachts!  Since its opening, the marina with 915 berths has seen the arrival of countless boats belonging to royalty and millionaires looking to enjoy the sun-kissed beaches, champagne bars and VIP lounges of the port. 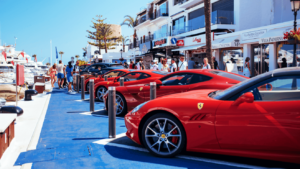 For 70 years, famous people have been chosen Marbella as a residence or a holiday home. The list is endless: royal elite and aristocratic families of Europe, Persian Gulf and Latin America, global leaders, presidents and prime-ministers, prominent politicians, Forbes-listed businessmen, Nobel Prize winners, entertainment, culture, sport and food scene celebrities. Do not be surprised to meet a Russian oligarch or a Saudi prince preparing to set sail on a yacht moored on the marina. Walking down the street you can bump into Antonio Banderas, George Clooney, Hugh Grant, Dolph Lungren (who once has been officially appointed as ‘Ambassador for Marbella’), Mariah Carey  (who filmed a video clip in Banús), Tom Cruise (who filmed some scenes from ‘Knight and Day’), Simon Cowell, Eva Longoria, Paris Hilton, the Kardashians and TYGA, Bruce Willis (whose ‘ex’ María Bravo was born in Marbella), Ashley Cole, Novak Djokovic or Cristiano Ronaldo (who bought a villa next door to Conor McGregor last year). This A-list is worth another post!

It’s hard not to fall under the spell of this irresistible, glittering part of “Coast with the Most”. Naturally, Puerto Banús is not known to be cheap. Prices are high. Parking garages cost upwards of 40 euros for the day. If this place seems to you to be a vanity fair, well, you are right! There’s no denying that it’s where people come to see and be seen, to show off their wealth, and money is not a consideration. People have been known to spend thousands on champagne just to shake the bottle and spray it amongst the crowd.

If it’s any consolation, port Banús doesn’t appear in the list of Top-5 most expensive marinas worldwide or even of the Mediterranean. 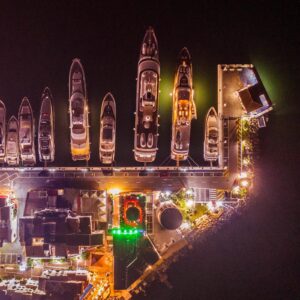 Puerto Banús from the air

Then comes 4S: sun, sea, sand, sangria lifestyle. Perfect for quality family time, wide and clean beaches are often awarded with European Blue flag (Playas Nueva Andalucía, de Levante and del Rio Verde) just a short saunter from marina. Yacht charter service or private boat trips allow to craft a cruise tailored to your interests, experience the scenic beauty, learn about the region from a knowledgeable skipper, search for dolphins and other marine life, swim, relax and indulge your dreams. Every day can be an adventure; playing aquatic sports, fishing, paragliding, jet skiing or surfing are just a few of popular activities in Banús. Well, beaches and partying go together like hot summer and cold sangria. The famed local beach and night clubs are a hedonistic home to wild ‘tan-sip-dip’ parties and lavish, sophisticated or decadent events rival to those in St Tropez, Miami and Ibiza. 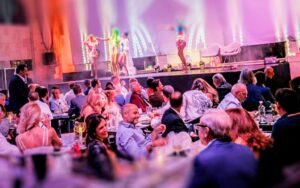 A great variety of restaurants offers food aficionados everything from traditional Spanish cuisine to Italian, Lebanese, Indian, Chinese, Argentinian, Japanese. Among other attractions are the American joints and Hard Rock Café, located right on the corner of the lively Plaza Antonio Banderas which hosts the artisan street market. Open air markets are a big part of Spanish culture and browsing Zoco del Sol Market is a delightful way to spend family time soaking in a laid-back yet lively atmosphere in the heart of Puerto Banús.

If you like movies, Cines Teatro Goya Banus is one of several cinemas in the area and the only one offering regular English movies. Events like premieres, film festivals, broadcast ballets and operas, documentaries and stand up comedies are held at this great cinema complex. Birthday Parties are the cinemas speciality!

2 impressive statues are the iconic landmarks of Puerto Banús. One is a monster masterpiece, a symbolic, weird and wonderful 3-ton statue of ‘Rhinoceros Dressed in Lace’ by Salvador Dali (genuine!). The other one is also gigantic and eccentric. Built of bronze and copper and standing on top of a 26m tall granite column, ‘La Victoria’ was created by the most popular post-soviet sculptor Zurab Tsereteli and gifted to Puerto Banús by the Mayor of Moscow in the 90-s. The locals dubbed it “The Russian seeing sea for the first time”.

The famed Marbella Casino is just 6 minutes’ drive from your ‘Perlas del Mar’ villa (3.1 km). A good half of “James Bonds” gambled there – Hollywood adores Banús! With American roulette, blackjack, poker, Midi Punto Banco and state-of-the-art slot machines you are spoilt for choice. Add live show (in summer), art exhibitions, a restaurant (best wines, fresh foie gras, roasted lamb) and a bar in which to celebrate …or not. Smart casual dress code and passport required. 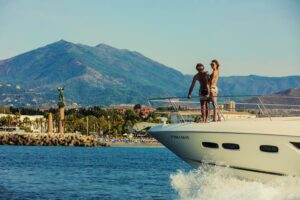 Couple enjoying on a yacht in Puerto Banús

The future of Puerto Banús.

In 2019, Ángeles Muñoz, the Mayoress of Marbella, and Juan Núñez, the CEO of Puerto Banús, inaugurated the Banús Christmas Market and presented the key points for the 50th anniversary of Puerto Banús. New image, new logo, an array of modern actions to attract a new target profile, millennials… The face of the new marketing campaign is Lady Kitty Spencer, Princess Diana’s niece and a leading British fashion model.

Due to the coronavirus pandemic most of the planned year-round events have been cancelled. But anyway, there is no doubt that at all times it’s hard to beat Puerto Banús when it comes to fun and entertainment for those seeking premium experiences.

Between your gorgeous villa in ‘Perlas del Mar’ and charismatic port Banús only 4.1 km! 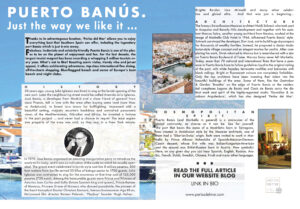 FacebookTwitterRedditLinkedInTumblrPinterestVkEmail
How can I help you?

Not register yet? go to register