San Pedro de Alcántara was born in 1861. Only 36 people lived there in 1860; a year later the number climbed to 530; today’s population is around 25,000 inhabitants.Of course, the roots go deeper and we can see it. The later settlement of the area is linked to the Romans (Roman terms ruins, 1st century AD). Paleo-Christian Basilica Vega del Mar (4th’- 6th century) was a miscegenation of cultures distributed among the Romans, Visigoths and Byzantines. The watchtower of Las Bóvedas was built for coastal surveillance against the Berber pirates (16th century).

HOW SAN PEDRO GOT ITS NAME.

The history of current San Pedro is connected with an Argentinean-born Spanish general Manuel Gutiérrez de la Concha, the first Marqués de Duero, who created a unique Agricultural Colony, the most important in Spain, and the largest private initiative. Gutiérrez named it after his favourite saint and his mother, Petra de Alcántara Irigoyen. His wife was from a noble Málaga family. The estate of 5,000 hectares made up of her coastal inheritance extended through Marbella, Estepona and Benahavís.  Sugarcane plantations made this part of Spain look more like Cuba than Andalucía. 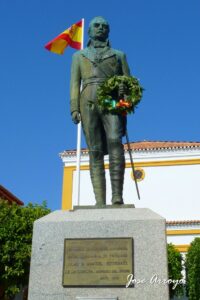 It was a model farming community with infrastructure, roads, farmhouses, reservoirs, animals purchased from Switzerland, sugar mill, electricity factory, advanced Cuban and French engineers, best machinery available from Europe, UK and USA. Marqués’ enlightened approach involved professional training of farmers attracted from all over Spain. The extraordinary man had utopian vision which encompassed the building of an observatory, libraries, fish-farms, in fact, an entire new town.  He embarked on the project with promises of practical and financial state aid, but was left to support it from his own pocket. Cereals, legumes, eucalyptus, fig trees, citrus fruits, cotton and livestock were added to help feed the Colony. However, by 1865 Marqués was a bankrupt, according to “In Search of Andalucía” by Chris Wawn and David Wood.

General Gutiérrez took part in Carlist Wars and triumphantly entered Bilbao together with his Andalusian friend General Francisco Serrano, the future Prime Minister and executive President. Shortly after, Marqués was killed. After his death in 1874, the Colony was sold to creditors and reorganised as a commercial company La Sociedad de la Colonia, with Franco-Hispanic capital. The sugar and alcohol factory was adapted to process beetroot. Reservoirs and aqueducts were built to increase the number of irrigated hectares. One of the most advanced project in Spain continued and included Las Medranas (now Cable Ski and Wakeboarding Centre), Nuevo El Ángel (now Turtle Lake in Nueva Andalucia) and Cancelada (now part of Los Flamingos). Today we drive through La Fuente del Spanto dam’s remains when leaving the AP-7 motorway at San Pedro.

Today, streets, statues and historical buildings still relate to the old Colony of the pioneering founder Marques del Duero, an Utopist and Innovator.